Kill The Weekend return with their second EP – ‘ Liars and Lovers’

Kill The Weekend are leading the way in a new breed of UK punk-rock bands. Armed with an abundance of catchy hooks and reassuring melodies, their sound is reminiscent of  ‘You Me At Six’, ‘Deaf Havana’ or  ‘Young Guns’.

Having completed a busy summer of gigs, including a packed-out set at Guilfest, the band now brings listeners the accomplished Liars and Lovers 5 track E.P

We had an early listen to the EP and this is what we think:

‘Beyond Everything North’ has tumbledown drums and earnest vocals atop a carefully crafted scaffold tower of razor sharp guitars. ‘Three Times Unlucky’ is a melodious and catchy suburban pop  song with a bit of grunt and attitude and a slice or two of punky fizz.  ‘Strength In Innocence’  has fresh clean lines of shimmering harpsichord sounding guitar and glittering cymbal bursts lining a bed of sounds  for a treasured yet lonely voice.  A female guest vocal adds a further sumptious luxury layer to this worthy jewel box.

‘So Much To Say’  has engaging tones that set up the tune, and distorted guitars are pushed upon you like a chugger on a mission.  Added to this are zealous vocals that punch-along like a factory printer on a big job.  ‘This Fire Feels Like Home’ – provides gigantic chords that create a sense of splendour- and the verse fairly flies along like a brace of fowl put up by a gunner. Winsome vocals and chattering yet captivating guitars bring the mixture to a boil in time for a chorus and an ambient visceral distrust that hangs in the air. – Neil Mach (c) 2011 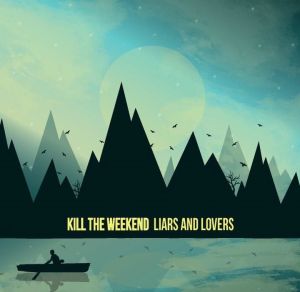 You can pre-order the EP now on the Kill The Weekend Big Cartel site:
http://www.killtheweekend.bigcartel.com/product/liars-and-loves-ep-pre-order

Or see them at the EP release show: