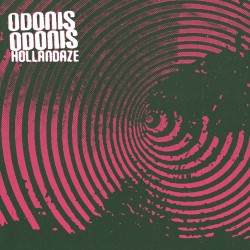 Originally a solo project for prolific songwriter/ band-leader Dean Tzenos, “Odonis Odonis” has only recently become a live band project, playing their first live shows in May and picking up heat as one of the buzz bands of Toronto’s NXNE festival.

Tzenos now brings his low-fi industrial style punk to new listeners in the shape of freshly released album ‘Hollandaze’. Compiled from a wealth of material written and home recorded between January 2009 and September 2010, “Odonis Odonis” officially release the album on 7th November 2011.

We were privileged to get a sneak preview:

‘White Flag Riot’ has bass buffoonery not unlike Bolan’s ”The Groover” [1973]  but rinsed with those eddies of raggedy guitars. Vocals are paper-cone based and feel
as hollow as tins of tuna.

‘Blood Feast ‘ sounds like it has been squeezed out of the pipe like a line of gooey paste – as bitter as any acid drop and harsh enough to bristle your ego like a brillo brushed heartily over your sack.  Pulsing beats start inflicting a slowly infectious headache, and this helps to pile on the pressure.

‘Seedgazer’ is a whale-note sounding underground railway workers style lament. The first notes are like heavily suffocating snogs. It’s like being snuffed out in a weighty blanket. But there are also moments of pure genius arising from the oblivion.

‘New World’ has charred bell-pipes that are soundly thrashed against a hollow willow wall as the grimacing vocals twist and turn in anguish.  And ‘Handle Bars’
is a Mersey beat song, heavy with a concoction of Lala vocals and yet fringed with shaking screams that are complemented by pools of rock n roll guitars- with the kinda of itchy and scratchy drum-work that only Ringo would have been pleased with. Tatty, yes, but you will yearn for more.

‘Basic Training’ has big bottomed bass grooves that fill the void before the Humperdinck  style vocals scream and crash in, like an eagle. Ribald and licentious as any old pro, and as cutting edge as a fresh new blade on a thrashing machine.

‘We Are The Leftovers’ -has ja-jinks of sound bitten melody and a weary underwater voice that weaves its tendrils around the sandy rhythm and starts to grab hold of your arms, pulling them under the flume.

And our favourite track, ‘Ledged Out’ has a bracing bouncing bass with a rhino-heavy rind that comes out of your speakers like billowing black smoke. Then the dancing beat causes your ponytail to whip and flip and before you know where you are, your blue suede shoes are bipping with the relentless pace, long before you can go back in time to save  yourself. The Tijuana brass sounds will then grab you by the scruff of the neck and fling you bodily into the most furious mix you have ever suffered. There is no hope of escape.  And you won’t want to leave!
— © Neil_Mach November 2011 —