LAURENCE JONES, from Liverpool, is probably one of the best blues-rock guitarists in the UK right now. He’s only 25 years old and yet, to date, has won four British Blues awards and toured with the Southern Royal Brotherhood, Wishbone Ash, Johnny Winter, Walter Trout, Tony McPhee, Vintage Trouble and Kenny Wayne Shepherd, among others.

Jones will release his new studio album, titled “The Truth” this March 9th 2018.

He recorded the new album at the old Sony Studios in Miami. It proved to be an incredible opportunity when Top Stop Music, a Grammy-winning record label, signed with Laurence and proposed that he record the album in Florida: “The studio has so much history,” Laurence said. “It has always been a dream of mine to record in America and I wanted this album to have that USA magic...”

“The direction of this album is one I have always wanted to take and that’s crossover blues, just like my heroes John Mayer, Eric Clapton and even Jimi Hendrix. They managed to really bring the sound of the blues to the masses. This is definitely my favourite album that I have made to date. I can’t wait for people to hear The Truth.”

To coincide with the release of the new album, Jones begin a tour of the United Kingdom in May (European dates start in April.) We had an idea of ​​what to expect from the tour and the album when we saw the young maestro perform an amazing headline show this week at the magnificent Borderline venue in London.

On stage, Laurence Jones is dynamite and diamonds. He plays an endless variety of sounds, from invigorating riffs — filled with rocky nuance — to elongated nickel & steel structures that often tail into power ribbons and magneto flashes of brilliance. All this and exuberant harmonic tenderness !

And he “feels” the blues too as its transmitted through those ever-nimble fingers — vitality and emotion comes quick and easy.

The show opened with “What Would You Do” with chattering, stuttering, stalking rhythms, wah-wah juiciness and an addictive chorus.

The jingle-some chimes and greasy keys on “Don’t You Let Go” were replaced by acute spikes of guitar. And Greg Smith (bass) eased the number along with ribald fluctuations.

“Gone Away” was a blazing roister, with acid-drop rhythms and a silvery shimmer that lasted right through to the satisfying end.

“Never Good Enough” [written when Jones was just eighteen!] was a slow-groove ballad with each subtle texture soulfully relinquished — every supplicated, lovesick, guitar-note torn from the heart.

But the apotheosis of the show was undoubtedly the older-number, the fizzacular and face melting sensation of “Thunder In The Sky” ( originally recorded in 2012.)

This had the fierce electricity and grubby street-sleaziness that we associate with Electric Ladyland and the impulse, elevation and buzz of Voodoo Chile. So it’s no surprise that Laurence Jones followed this stellar piece with a stimulating cover of the Dylan/Hendrix “All Along the Watchtower.”

Vocally, Jone’s is no Orbison or Holly — more yammer than yawl — but his vocal style is competent enough. And, anyway, Hendrix was never more than a gossiper, mutterer and drawler. Also, perhaps, the set could have been more cohesive: the slow build-ups were often followed by clouting hammer-blows of sheer power, and these rapidly quenched till fired again — sounds OK to you?  Yeah, but the overall effect could sometimes prove to be more pitch than roll. But these were trifling quibbles, and likely will be resolved in the shows that lie ahead. (UK Dates in poster below video.)

Looking for a 21st century equivalent of Jeff Beck, Jimmy Johnson and Buddy Guy?
LAURENCE JONES is your man. Look no further. 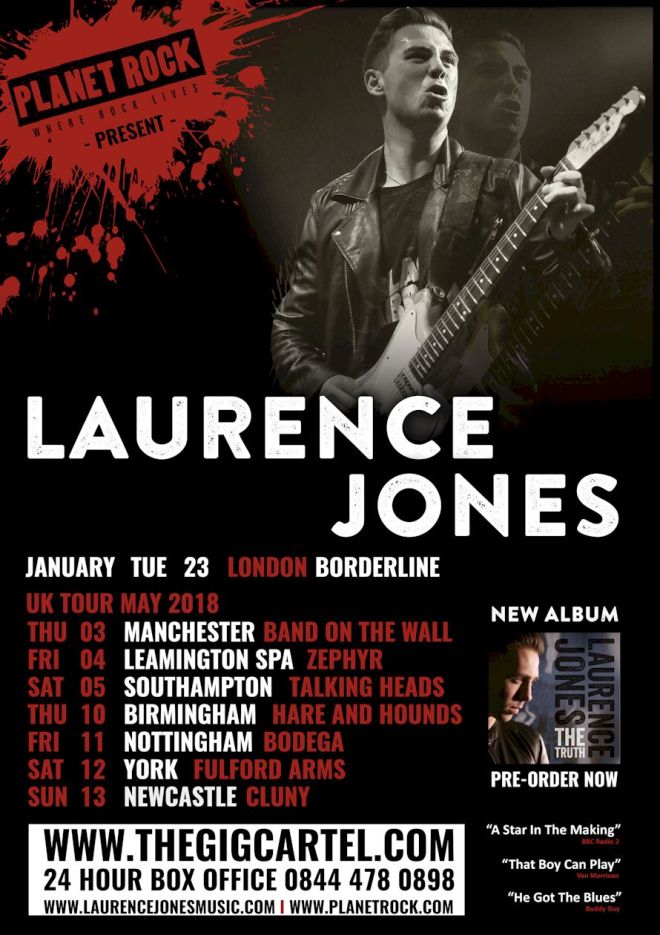