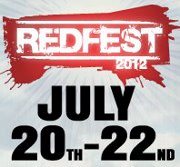 Arriving at the beautiful site of Redfest at Robins Cook Farm things looked a bit gloopy. Dark clouds swirled and threatened overhead and we decided to quickly get our tents up over our heads, in nervous anticipation of a very imminent downpour.

Kicking the festival off in style were locally based rockers ‘The Blue Pursuit’ (who managed to sticka the whole site within a few hours – every toilet seat was stickered–so most bum cheeks were impressed by the band.) And then we were treated to the tasty post prog-metal anthems of XenicibiS adding texture and celebration – to go with our much needed ‘first drink of the day’.

Over at the Acoustic tent stunning ‘Alice Dale’ performed an intrinsically radiant set that warmed up the delighted crowd,  and she was followed by the profound musical talent of ‘Lewis Mokler‘ pursued – as usual – by his gaggle of female devotees -his  ‘Hot Moklates’.

Bringing some glamour and sophistication to the Gozibe Music Introducing Stage was the talented and majestic Hertfordshire 5 piece  ‘Burn So Bright’  fronted by the delectably attractive Millie.  Then, after a sizzling set from the Borderline:Fire, the plentiful crowd in the Gozibe tent were treated to the effervescent magnificence of those haughty rockers ‘New Ivory’. 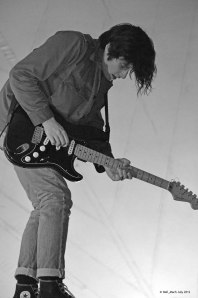 This undeniably controversial and reliably theatrical rock act is causing quite a buzz on the live music circuit. And festival goers could see for themselves how the band have managed to garnish their reputation.

New Ivory tactics/antics included their drummer Nite succumbing to a hysterically childish yet divertingly comical hissy fit because his stool was too low – he threatened to walk off stage before the band had even started to play a single note.  Later on, front man Mickey started climbing onto one of the main speaker stacks (the ten foot high one) – much to the alarm and trepidation of the security – to play a lead-guitar solo. He later huskily waltzed off stage in an indignant huff – but not before he had executed an enigmatic stage dive and returned to the stage crawling on all fours. Who needs humility?  This is rock and roll…

WeCaughtTheCastle put on a grandstanding show- the radiant smile of golden-haired singer Hollie Elizabeth helping to offset the dark & gloomy clouds threatening to form overhead.  WeCaughtTheCastle had already suffered the humiliation of having their tour van securely locked in sticky mud in the track that leads onto the backstage area – but the security staff has helped pull the van out of the mire – and get the timings back on track.

As usual ‘Attention Thieves‘ staged an excellent and enjoyable show. They are now scheduled to play Reading and Leeds (BBC Introducing Stage) so if you missed them in the intimate environment at RedFest, then you will have missed out on seeing this amazing band at close-hand. These boys are sky-rocketing up to the very top. Mark my words!

Over on the Main Stage the first of the really big hitters of RedFest 2012 unfurled their array of furious, but complicated,  metal extravaganzas to the amazed and adoring crowd. Playing an enormously enjoyable and deliciously frenetic set, Mallory Knox set the tone for the rest of the evening … magic, mayhem and  munificently mighty metal.

Next up were the sublime dub-metal doom-punk magicians (everyone is now talking about them) Subsource.  Still doing their best to destroy every soundsystem in the land, they played numbers so exotically deafening that it is some small wonder that the band didn’t set off some kind of a quake alert!   And, man, can these fella’s play?  What  an incredible treat!

Over on the Gozibe stage ‘Honour Is Dead’ were playing to a jam packed house – their Metal/Hardcore sounds causing muddy confusion in the jammy mosh pits. And then the magnificent ‘Shadows Chasing Ghosts’ screamed onto stage with their death or glory anthems bursting out to the frantically baying crowd.

When High Wycombe’s ‘Young Guns’ rose up onto the main stage to confront the rabbling masses – the party really began to sizzle. As the animated crowd lurched, lunged and reeled as one, the band played a masterful and truly electrifying show. This band is one this country’s most bravely ambitious bands, and they are already looking to dominate the sound-waves with their ‘Bones’ release. They have justifiably earned their title as the UK’s greatest ‘must have’ band at any live music event. Lucky RedFest revellers could see why this band has managed to garner themselves such a righteous reputation.  Their musicanship, songwriting and showmanship is truly out-and-out brilliant. This  performance marked them out as one of the highlights of the entire RedFest weekend.

But the icing on the RedFest cake was yet to come – because the remarkable ‘Modestep’ was headlining on the main stage.  This band’s unique blends of dubstep, rock and electro sounds nearly caused a mini-riot – especially as Josh Modestep demanded that revellers “Get up and get moving…”   Motivated by their womp-womp spirit and irresistible energy, the whole crowd jumped –       AS ONE-  for joy.  Joy of life.  And joy for music.  What a day!

TBC: Check back soon for Part Two of my RedFest Report