After a small amount of confusion in the dance tent – Friday night soon got off to a promising start with some monster sounds outrageously produced by the eminent RedFest DJ’s.

Revellers danced to the fun-packed electro clubland grimy dubstep grooves from 10 o’clock until way into the wee-wee hours … and the crowd were even entertained by a Modestep DJ set. It was a legendary party! If you weren’t there, shame on you.

And on Saturday morning, after sleeping 2 hours (on average) things seemed even more exotically brilliant. Why?  Because the sun had come out to  play!

Suicide Si and Taygon Paxton lit up the Acoustic Tent in the morning with their generous and motivational sets. And punk stars ‘Loose Lips’ provided some much needed summer madness over in the Introducing Tent. They were followed by the young hip-hop combo ‘Critical State’ getting all hot ‘n’ sexy afterwards.

Up on the main stage, meanwhile, Clement Marfo and the Frontline gloried in the huge crowd anticipation. Grabbing many new converts for their funky blend of hip-hop and rock, this band’s idiosyncratic fusion of dance sounds created the ultimate party atmosphere in the afternoon. An enthusiastic crowd basked in the glorious afternoon sunshine – and lapped up Clement’s hugely entertaining set. 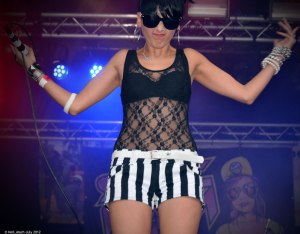 Next on stage were the inimitable Manchester based Rock / Reggae Hip-Hop slicksters Sonic Boom Six. When Laila K shouted to the crowd to get up onto each other’s shoulders – and sway – all followed. This was  sexy. It was sleazy. And it was shimmering sensational fun. SB6 are a real stand-out act.

For a more subdued, but nonetheless magical, experience –  many of us went over to the Acoustic Tent for some delectable goodness – courtesy of those  luscious sounds from the soothing voice of Kadija Kamara. Her amazingly beautiful vocal range reminded us of Aretha Franklin. She was followed by the equally impressive and totally captivating pop-soul ‘diva in waiting’  Kal Lavelle,  who performed an enjoyable and cheekily humour filled set to a delighted audience.

Kings Lynn heavy rockers Deaf Havana played a gig so loud and so ear-bashingly invasive that it, quite literally,  hurt. I have the bruises to prove it.  How can anything compare with that extraordinary power and unbridled energy?

Well, Fei Comodo certainly gave it their all –  with a mighty set. Their impressively awesome energy nearly brought the Gozibe Introducing tent down around our ears. But, alas this was to be their first date in a swan song tour … so if you missed them at RedFest, I’m afraid to tell you that time is running out to see them live for one last time!

The headline act on Saturday night were the South Wales rock legends and showpiece sonic supremos ‘Kids In Glass Houses’. This band plays rock ‘n’ roll in it’s finest form. Full on, dynamic and spirited music played at the highest possible volume- like the mighty zeal of a cataclysmic storm.  How anyone could sleep after that? I don’t know.  And as far as I’m aware, no one did!

With dance tents full to capacity and some legendary DJ’s stacked up – the parties literally went on from dusk till dawn! And the sky stayed cloudless! OHMYGOD !

Best memory:  Vocalist Laila K ( Sonic Boom Six)  hastily writing  ” I LOVE LAILA … FROM SONIC BOOM SIX’  onto the back of a totally unaware punter in the crowd !

TBC: Check back soon for Part Three of my RedFest Report