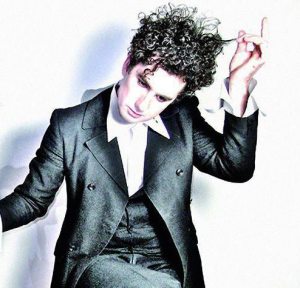 Pioneering electro-rock maestro and Mighty Boosh collaborator James Cook releases both his new album and single of the same name on the same day, through his own label DeepSeeMusic on the 15th of October. Cook’s previous work was in the London electro rock band ‘Nemo’  (winner ‘Best New Band’ Montreux Jazz Festival 2006). After that, he moved to Berlin and recorded 2009’s Baroque Pop curio album ‘The Dollhouse’ with violinist and collaborator Anne Marie Kirby.

‘Arts & Sciences‘ was recorded in Berlin during 2010 and 2011, all ten tracks reveal a diversity in Cook’s repertoire utilising dexterous synth lines and buzzing guitar riffs, loops, piano, acoustic guitar and intricate arrangements.  ‘Arts & Sciences’ features players such as Phil France from The Cinematic Orchestra, as well as Chris Corner (IAMX, The Sneaker Pimps) who also assisted on mixing, editing and mastering the album.

We listened to ‘Arts and sciences’ and here’s what we thought:

‘Self-machine’ gurgles like an incarnate percolator spouting its last froth.  A cheerful playground melody glistens, as the murmuring rhythms keep this song sputtering along – like a one-legged duck out-of-water.

‘Government Kid’ has a nostalgic enamel glaze. A slightly Jamaican rhythm, bass notes that elastically twang against your thighs, and squealing guitars that squeeze every last drop of juice from the thin melody .

‘Wrong Empire’ is dainty and playful. A ripple of stuttering keyboards flutters over the mature voice. ‘End of Summer’ has whimsical orchestral dimensions. The lumpy bass notes are strung out like licorice ropes around the familiar sounding melody. This is hummable and mallowy.

‘Selling Ideas’ has a lattice work of strings, and a cunningly complex melody that reminded me of an early Dave Cousins song (Strawbs) produced by George Martin – for the Magical Mystery Tour.

Title track ‘Arts and sciences’ has a very British freshness about it.  The sounds and the vocals may remind you of David Bowie in the Hunky Dory days. This piece of work is reminiscent of the track “Kooks” –   which in turn was inspired by the voice of Neil Young.

Plucky ‘Sediment in Wine’ wavers on the edge of queasiness. This one is probably best left on the shelf.  And ‘Face to Face’ is free from modern influences. This piece is unashamed nostalgia.

‘Circus of Our Lives’ has ponderous piano notes and a certain buffooning quiver about it. As sweet and as fragile as chocolate caramel crispy, this track has an epic Michel Legrand quality to it.

Wrap yourself in it, to get the best out.