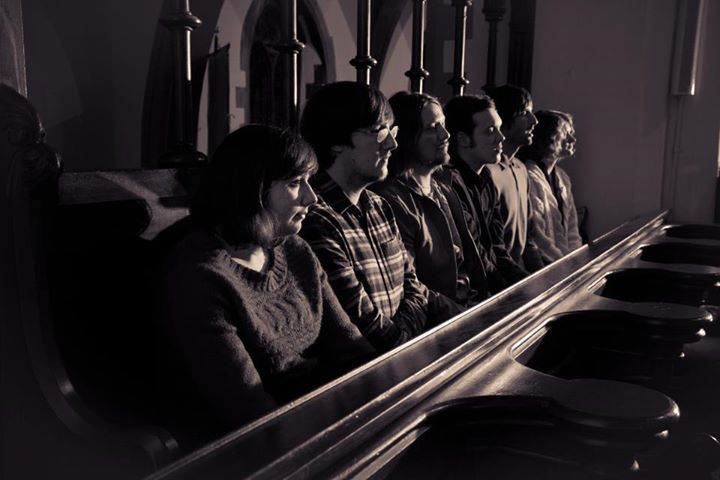 As Emily Dickinson’s line goes: “This is my letter to the world, That never wrote to me.” And I feel that the music of “Winter Villains” would have been written even if it had only ever drifted off into the desolate hills. There is always a lot of debate about the topic of ‘purity‘ in musical circles. What is purity of music? What might be pure for one listener – could be considered contrived, desperately striving for commercial acceptance – or just rubbish – to another. (N.B Coldplay are in neither camp, they are the worst thing to happen to humanity). Music is subjective. Herein lies its beauty. For me, this band contains purity of sound – they do not offer the feeling of creating music for music’s sake.

From Cardiff in South Wales this 6-piece band released their debut album titled “February“.  An unpretentious record – but special in its own right.  The band gave me that sweet feeling that you get from listening to music from ‘off the beaten track’  … to have discovered something very special.  However, it seems that I am not the first to feel this way. The album has gained early praise from such radio luminaries as Jen Long (BBC Introducing) and Tom Robinson (BBC 6 Music).

In the Winter Villains press release for the album, it states that founding member and multi-instrumentalist Josef Prygodzicz ( crosses fingers and hopes that no one asks how to pronounce that name ) and Faye Gibson (vocals and percussion) wanted to make music “That reflects the fragile beauty of the winter season”. As someone who abhors head colds, and the drop in temperature, this originally sounded insane to me. But upon listening, I must admit to at least a semi-conversion to that dark season and bane of this part of the world’s year.

Songs like the album opener ‘We Stepped In To The Night’ embody their above statement with a starkly atmospheric piano led intro that – when you listen carefully – you can imagine that you almost feel the temperature drop in your room – and can see your breath swirl frostily in front of your face.

Other real highlights come from the first single of the album: ‘Moon’ – with its fairy-tale like glockenspiel notes lending a magical depth. And ‘Icebergs’ – with it’s warm yet almost monastic layered vocals that evoke church choirs.

It’s as if Simon & Garfunkel  had asked friends to come round … who could all sing … to sit around the fireplace while the winter winds howled outside. Oh! And their friends also happen to have brought with them their violins and cellos, and they are all hugely adept at creating cinematic, ethereal back-drops to their hymnal compositions.

If the band leave you wanting more from their little magical secret universe, then I highly recommend that you consider stalking them – as I did – and finding their videos on YouTube. Their ‘Church Sessions’ (which does… well.. what it says on the tin really -) is a film of the band performing live in a church. It’s a lovely insight into the band – and seeing them doing what they do best.

The sounds on this album are painted with the care and fragility of one of those beautiful watercolour pictures you might find in rural out of the way places – as opposed to the painfully mundane almost factory pressed ones that those haughty looking ‘Scarves & Junk Jewellery’ morons flog at the seaside.

Sheer quality exudes from this record. So it shouldn’t be surprising to find that such an established and prestigious team were behind this album. It was recorded and mixed by Charlie Francis (REM, Turin Brakes, High Lamas) at Musicbox Studios in Cardiff and mastered by Mandy Parnell (Sigur Ros, Mum, Mogwai)..

Out now in an edition of 250 limited edition CD or digitally through iTunes and Bandcamp through Barely Regal Records.