We had an opportunity to chat with the musician in London, prior to the release of his album, reviewed here. 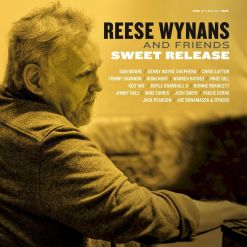 RAW RAMP: What is it like to find yourself on the front of an album cover?

“It’s kinda shocking, stressful and I’m not really the front man kinda guy. But yes, I apologize, but my face is on the front… I wish I was better looking…”

RAW RAMP: Do you remember when you first heard rock ‘n’ roll?

“I was raised in Florida. We weren’t allowed to listen to rock ‘n’ roll in my house. Growing up I took piano lessons and my father and mother liked “Sing Along with Mitch” [a weekly TV series, 1961] and things like that. The first time I ever heard rock ‘n’ roll I went nuts… I thought it was the best thing I’d ever heard. And the first rock ‘n’ roll show I ever saw: Jerry Lee Lewis. I saw him after Great Balls of Fire had been out… [at the Bradenton armoury] it was July 4th, with firecrackers going off, it was wild…and he was playing spirited piano. It was perfect. The wild man himself, on piano… and of course that show changed my life.”

“I was with several other local bands before Second Coming: The Second Coming was Dickey Betts, Berry Oakley and Dickey’s wife Dale who played organ and also a drummer named John Meeks and [the guitar player] and friend of mine: Larry “Rhino” Rhinhardt — who went onto play with Iron Butterfly. ”

”When Dale became unavailable to play organ — she was due to have a child — Rhino recommended that they call me… and Second Coming was in Jacksonville, I was in Sarasota, so I went up to Jacksonville — though I’d never heard the band — but if Rhino was in it, I knew they they’d be pretty good… and lets be honest, if Dickey Betts was in it… well he was a legendary Florida guitarist and everybody wanted to play with Dickey Betts..”

”And I knew Berry Oakley and he was a sorta mystical guy (I’d met him in another band) so all of a sudden I’m playing with these guys and Dale has the baby and they say: “Why don’t you stay around… and Dale will be the lead singer.”

“The next thing you know, here comes Duane Allman from Muscle Shoals saying, “I love this band… I love Dickey Betts and I love Berry Oakley and I love you too Reese but my brother’s gonna play keyboards in my band…” I said, “Can’t you have two keyboards; You got two guitars and two drums?” But he says, you can have two guitars or two keyboards… but you can’t have both. Of course, he never said that to Chuck Leavell later on… but that’s another story.”

“But Duane felt bad about it… yeah he did, so he got me this gig with this guy who’d just finished cutting with this guy Boz Scaggs. He’d moved up to San Francisco and I was told if I didn’t mind moving to San Francisco too I could be in Boz’s band. So I moved there in 1969-70. And, of course, everyone wanted to be in that City.”

“All those West Coast band were legendary to me… I couldn’t wait to see Janis Joplin, The Grateful dead, Quicksilver [Messenger Service ] and Jefferson Aeroplane… I loved it … it was an education. But my wife didn’t love it so well — she left me out there. But it was an education for me: I played the Fillmore with Boz. And, “Sweet Release” the name of my album, was the title of one of Boz’s songs. And I love playing that song. “Sweet Release” it was the song that always just spoke to me… I suppose it was my favorite Boz number. Now, even after all these decades, nobody has ever covered it. And, when I play it to people they say: “Yeah, it’s okay…” but I think it’s great. ”

“I was a studio musician in Nashville for about fifteen years and I thought: I’d like to take another tour around, before I get too old. Just to see if anybody will remember me or appreciate me doing that. So, it turned out, people still knew who I was. And this record is for those guys. Or maybe for all those who are not sure who I am. Ha ha! ”

“As an older man I know the traveling can be arduous. But I’m with Joe Bonamassa’s band and we are one of the fortunate bands: we travel first class, stay at beautiful hotels… but it’s not easy for some when you get to be seventy… you have to stay in shape, eat well and exercise. But, Joe says I play better now than any time in my life even though I tell him I passed my prime thirty years ago.

RAW RAMP: Has JOE been a hard-taskmaster as a producer?

“As a producer this is the first thing he’s ever produced. All the Joe records have Kevin Shirley as a producer. But this was Joe Bonamassa’s initial venture into music production. And it was his idea to do this. And he had the whole concept: “Reese, don’t do an instrumental record like everybody else. Have vocalists. Do songs that are famous.” Joe was masterful. He did his homework, he was ready for every song, he was wonderful with the arrangements…”

“We only cut one song from our original song-choices… we did a version of “Opus de Funk” which was a funky little jazz tune but Joe thought it didn’t fit in with this group of songs, some maybe it will be released later, some time. We both chose the songs we wanted, I started by saying I was only gonna do one Stevie [Ray Vaughan ] song: I was gonna do “Riviera Paradise” and maybe “Hard to Be” but Joe wanted to do “Crossfire” and “Say What!” and I said, “That’s kind of a lot of Stevie stuff…” but he said, “No, you gotta do it.” So I didn’t win all the arguments. Although I wanted to do “Shape I’m In” which is an Arc Angels song [ Doyle Bramhall II ] and brought in some Tampa Red songs, we did the Otis Rush song that I wanted to do, and I wanted to do the Willie Mitchell song (That Driving Beat) we did that.”

RAW RAMP: We have been enjoying the track “Take The Time” tell us about that

“Yes, that’s the Les Dudek song that Joe brought in. That song, for me, evokes the era that I have been talking to you about: working with the Second Coming. With that band we started to play songs long! Jamming a lot and that’s maybe because everyone else was playing 45 versions of songs but we wanted to stretch them out.”

“And we had a house-gig at a psychedelic night-club called “The Scene” where they had a flashing dance-floor lit with projection screens and strobe-lights, and so we would play these long jams for the hippies back then. We would play six night as week at the club and on the seventh day we would play free music in the park… which the Allman Brothers did later on to great success. Also in Jacksonville at around that time was a band called The One Percent and their lead singer was Ronnie Van Zandt and the band went on to become Lynyrd Skynyrd. ”

“So I suppose that time and place became a little breeding ground for what was to become “Southern Rock.” And so, with “Take The Time” I get a kinda Southern-rock feel going on, that’s the impetus behind it. I even thought about doing a version of “I Don’t Want You No More” which was the song that the Second Coming started their shows with every night… and incidentally The Allman Brothers debut album [1969 ] started with a version of that same song… but I was gonna do that as a tribute to Second Coming but it wasn’t working out right so Joe found this Les Dudek song and that features Warren Haynes and he sang it great.”

“That was a Joe Bonamassa mission! I told Joe that when we were writing Crossfire … that’s Chris Layton, Tommy Shannon, and myself and with Bill Carter and his wife Ruth [Ellsworth] (they wrote the lyrics) and while we were getting the song together someone mentioned that we should send it to Sam & Dave. So I told that story to Joe and and he said, “Well, why don’t we call him?” So I said, “Well, I don’t know him!” but Joe was like: “Just call him.” So we called him and, er, he didn’t know who we were. Neither of us!”

“And he didn’t know the song either… so Joe had to call him back. But apparently, they found the song together and they listened to it on YouTube or something and Sam said, “Yeah, I’d love to sing that song.” So we sent him the track and he just ended up with a great vocal on it. To me it sounds perfect. I always thought that Sam Moore should be singing that song. And now here it is. And Sam is a really remarkable human being… he’s still singing great after all these decades.”

RAW RAMP: Tell us about recording for “Sweet Release”

“We did it in Nashville. We went to Ocean Way in Nashville which is a fantastic studio. And that’s where I’ve cut plenty of songs — in there — with some of the Nashville artists. I told Joe, I said, “Right there...” and I pointed to a spot in the studio is where I played the Hammond B-3 on that Brooks & Dunn song “Believer” which became the Academy of Country Music Award for Song of the Year [2003] so I said, “So this is it. We’re cutting our disc right here...” So that’s what we did.”

“I still use that B-3 because I bought it back in the day with Steve. Yeah, he found that for me and bought that and two other instruments for a thousand bucks. That was big bucks in those days!”

RAW RAMP: Have you ever used Moogs and so forth? Ever been tempted?

I like to have string-parts and I like to have different sounds, like the electric piano… but I never really got into the synth thing so much and, as far as the Moog sounds, some guys play a lot of lead on that stuff but I always want to play it on the organ for some reason. It’s just me… I’m more comfortable doing that. I probably should stretch my mind a lil’ bit and try to go into that but, er, I haven’t yet… after fifty years I think er… is there such a thing as too old to change? I dunno!

“Er? Micky Hutton… he was a fantastic keyboards player. Um, Chris Stainton who played with Eric [Clapton, on I Still Do] I’ve got to see him play a couple of times. And I’ve always loved that band Procol Harum… but a lot of British bands use American keyboarders. But you know who I like: The guy with The Animals: Alan Price. I love him. And I love the guy who played with the Zombies: Rod Argent… and he was still doing it, I guess.

RAW RAMP: Well, congratulations on recording a very fine album and we salute you on your long and illustrious career… long may it continue.