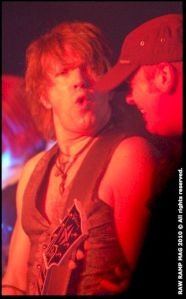 I Believe in Rock & Roll

Some glam bands are pretty boys, others are ironic,  many are strikingly artistic, even operatic. But not Marseille…

No, this is a working group of hard rock geezers , who just happen to like the sound and the strut of seventies rock, and like to glam up the chords and riffs a tad, for the masses. Like Rod Stewart back in the “Maggie May” days, or Suzi Quatro before the ‘Happy Days’. For the best example of all, think of Slade.

So I licked my lips in anticipation as art attacker Neil Buchanan (lead guitar) along with Nigel Roberts – (vocals) rushed onto the stage for a packed out rip-roaring concert at Hard Rock Hell IV, Prestatyn. Throwing everything into it, and pouring out the sweat and tears, the band played just about everything from their ‘Unfinished Business’ album, sounding like a glam version of Nickelback. A full-on throaty roar of rock.

We had songs like ‘Rock Radio’ ( Do you like Smooth Radio ? (no)  Do you like Jazz FM (no) shouts Nigel- well ’scuse me…  but aren’t they both the same thing ?? …. but maybe I shouldn’t admit to knowing that). This is a simple, buzzy song without blemish. Or take those the deep bruising bass notes (from Lee Andrews – Bass) on the humdinger ‘Rock It Tonight’.

We had ‘In For The Kill’ written by Andy Charters (who had flown in from the U.S. to play with the band – and looked like some kind of cartoon super villain, dressed all in black) with that lacework of nifty riffs. And we had songs like ‘Wanna Get High’ with flamboyant flares on guitar provided by Neil Buchanan along with superb rollin’ percussive fireworks from Gareth Webb – Drums.

“Do you Believe in Rock & Roll?” screams Neil. And the crowd explodes in unison.  ‘I Believe’. Yes, this song has that panting, grunting, thumpy riff  with a thrumming monotonous bass and a cheery anthem of a chorus that is so reminiscent of “I Love Rock ‘n’ Roll” (Joan Jett.)

The story is that the boys got back together because they still had rock and roll coursing through their veins, and it wouldn’t stop till they bled the rock out of their system.  Neil (looking every inch like Robin Askwith-out of one of these ‘Confessions’ films)  thanked the audience for their continued support and enthusiasm. But we screamed back that we needed them more than they needed us.  Guys, we need rockers like you now, more than ever, don’t we?  Because everything is so artificial these days. Because technology is killing true rock. Because everything is now so antiseptic, head-candied, over-googled and x-factored, that music seems like it is created by an insipid  and vacant you-tube army of facebook non-entities on a tedious march to nowhere, via brat-camp. But Marseille is the glorious antidote to all this.  Good, honest working man rock.

So the band played the title track ‘Unfinished Business’ with those shimmering glitzy chords casually replaced by sonorous thumps of a ballsy beefy riff played with sausage fingers and muscular arms. In fact the band reminded me a whole lot of those Scottish 70’s rockers ‘Nazareth’- perhaps without the cracking finesse -but definitely with all the associated sweat, beer stains and smoky public bar atmosphere that goes with any true working band.

Marseille are heroes of the blood.  If you ask me.