My Ruin – Not a Bloody Goth Band 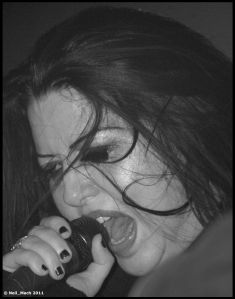 From those very first scurrilous sirenian low-register grinding calls, and the dark veil of majestically interwoven chords, we knew immediately that the Hammerfest festival is not only a place of worship and adoration for the laudable ‘old’ rock progenitors (take, for example the headliners ‘Accept’ founded in 1968) but also to inaugurate the sheer new brilliance of ‘modern’ rock maestros – in this case the much beloved act  ‘My Ruin’.

My Ruin is fronted by the cruel deceiver ‘Tairrie B’.

In this dark night, Tarrie looks every inch like Sally Bowles resplendent at the Kit-Kat club circa 1972 – albeit back-clothed by the darkest, mightiest and most unforgiving satanic metal musicianship heard, thus far, over the whole Hammerfest weekend.

Formerly singer with alt metal band ‘Tura Satana’, singer Tarrie B now imparts her own breed of stinky stark sharply-carved hoarse-drawn eloquence, against the formidable power of sound and skillful instrumentalisation of husband Mick Murphy- who, in this show, was peering and gurning through a bible-black lead guitar, although he is also known to be equally adept at the drums or on the bass.

‘Ready for Blood’ [“Throat Full of Heart”] starts with a full scream from deep within the soul, and then those vocals that sound as if they have been disemboweled from the pit of hell’s core.

Incessant and pitilessly moaning guitars provide flaming and unforgiving depths of sound – often illuminated by piercing shards of beautiful light as the lead-guitar breaks through from subterranean depths. Other songs,like ‘Made to Measure’ [“The Horror of Beauty”] have a fairly classical metal-sounding structure, of smokehouse black righteousness.

The concrete immensity of foundation songs like ‘Religiosity’ with its latent and bruising lead-guitar breaks and intricate templates created by Mr Murphy’s nimble fingers or ‘Metamorphosis’ with those classical ambitions and dramatically unfolding enmity towards the early sounds that it first reproduces, display the bedding-stones of a well structured musical career- set to endure.

These songs make you feel that the band is something like a cross breed of dragon-kin, as created by a successful coupling of a ‘Cradle of Filth’ monster with a maniac from the ‘Nevermind’ grunge era. 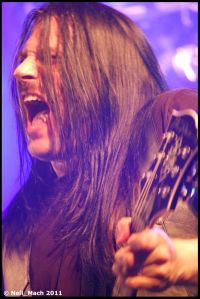 Tairrie B spent the entire gig laying across sweltering armfuls of well-wishers on the pit-fence, at the front of centre stage. Only twice did she alight her stage, briefly, to messianically  stare at the crowd, before returning back to the warm embrace of her auspicious acolytes .

Joined briefly by Aaron Sly (Vocals, Sanctorum) for a duet, Tarrie orchestrated the entire show to feel more like an ‘event’ than a traditional gig.

My Ruin made the audience feel special and significant. We were taken to a private place, and shown the secrets of the rock. Yes, it was a grown-up show-biz fantasy and a well-worn cabaret-style formula, but against the shining metal magnificence of that hard rock sounds, the gig was a private performance to celebrate and to muse upon.

Those who were not there, in this private place,  missed out on a special thing – a rare thing.

Tarrie made it clear that My Ruin were not to be pigeonholed “We are NOT a ‘Goth’ band” she declared. “We are a rock band”. Authentic, devoutly dedicated to musicality, twinned with living performance, and totally insane.  Yes, this was rock.

This band is like some kind of creation from Beelzebub after a particularly rapturous night out on the town.
You have just gotta witness My Ruin to believe the hype.