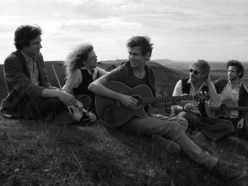 Common Tongues are a Brighton based 5 piece that combine the belly fruit of Bob Dylan and The Beach Boys to create compelling stories of their lives and loves.

2010 was a good year for the band. They formed in the early spring and found themselves on some fun festival dates such as Great Escape, Secret Garden Party and Playgroup festival. The band finished the year in the top 5 “best new acts in Brighton” via the Brighton Music Awards and with their first 2 singles in the can for release in April/early May. With some packed out London shows already completed this year, Common Tongues are now embracing a frantically busy 2011.

Having made a good name footstomping around Brighton stripped down to 2 guitars, a violin and beautiful 3 way harmonies, the full line up represents the energy and vitality the band want to communicate with their music.

The band have just won a competition run by Replay clothing in association with Clash Magazine to play at Bestival this year!  Exciting or what?

You can catch up with ’em here: