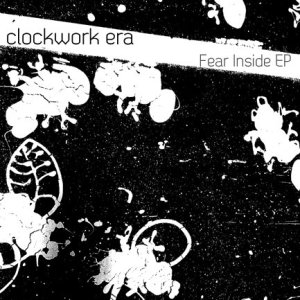 Clockwork Era ( Jason Lipscombe & Cat Gray ) create a cathartic noise that spits out bile through the disillusioned post-punk sensibilities that commentate on an imploding society through jagged riff-laden buzz-saw guitars, crunching drums and incessant repetitive mantra like vocals; war, social commentary, lies and paranoia are all delivered with vitriol, resentment and anger.

They release their new EP ‘Fear Inside’  on  23 April 2012, and we were lucky enough to get hold of the opening track. Here’s what we found:

This epicurean track from these high strutting punkster commandos, has sheets of frazzled guitars, wafered against the angular power, and the simple crunching tones
of adolescent vocals set against a fierce cymbal serenade. Brief squelches of guitar mushroom out and glimpse the startling air before dying out in an arc of pure light.  And always that relentless marching pace soldiers on.  The ‘Open Up and Open Wide’ vocal cameo sets up the end-piece,  bringing about a powdery and tumultuous crescendo of finely flumed guitar and quick-fire laser percussion. Moreish.
— © Neil_Mach March 2012–