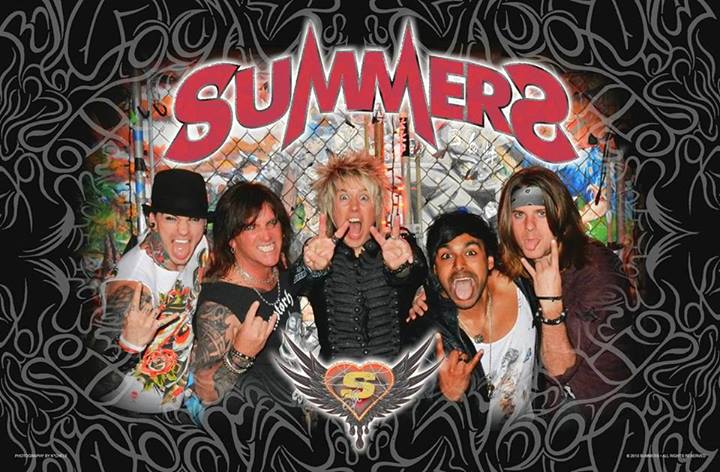 Based in Southampton in Hampshire (south coast of England), Summers hit the world music scene with a vengeance! The band takes its name from two brothers, Crash and Ricky Summers, who formed the group in 2007,  to create a unique blend of iconic stadium rock and new wave music.

Contributing to the incredible sound of SUMMERS are guitarists Jason Sepala and Joedy Rose plus drummer Andy Pope. Crash is the lead singer and Ricky provides the bass line.

SUMMERS released their debut single “Too Late” for world-wide markets in 2011 and have since issued their smash hit album “364”.

RAW RAMP caught up with the band at HRH AOR @ Magna in Rotherham. [ www.hrhaor.com/ ]

Can you tell me your album release –  What’s the name all about?

Yes, yes, that’s true. We were trying to think of a name and we were coming up with all these words…  really cool stuff I think… and then someone, someone (I forget who it was) but but someone just said, “Hold on. Why don’t we call it 364 …

Andy:  It was the drummer.

All: No … the drummer would never come up with something like that … [Laughing] Yes, it took 364 days, we went out on 22 September in Cyprus to get started …

… And, um, we only had the last track mixed and finished on September 21.

Why did you go to Cyprus?

Our producer lived down there. And instead of doing all sorts of “this and that” and doing it ‘bit-by-bit’, we decided to leave England –  to leave work and everything – and all go down together – and work together until we got it done.  And it worked really well …

It sounds silly, but we just needed some creative space. There were too many distractions at home, we have tried so many times before.

So we went out and there –  and we were only filled with music.

We lived and breathed music – until we were done.

So before you went to Cyprus did you have ideas in your head, or any written songs?

We had some ideas …  we did a little ‘pre-production’

We had some songs all prepared and then some of those songs did not make the album. Some we just sort wrote – or they almost wrote themselves  – and they managed to get on.

How many songs were there originally?

Yes, I think we were happy with 13. But we did not want an album consisting of 13 tracks [laughs].

No.  That would be a bit iffy

How do you communicate yourself as a band?

We try to surpass ourselves – not just as a live band – but as a real spectacle. So when we play a gig, we don’t just do a gig –  we do a show.

We have a way of trying to do things even more spectacularly.

Yes, We noticed that you tend to go wandering into the crowd

We try to make the best of all the available space. And we try to get around to see everyone.

What happens now with your album?

We’re getting to do a lot more concerts.  We are trying to promote as much as possible.

[Summers completed an East Coast tour in April. The boys supported Molly Hatchet, and got to hang out with lots of other legends – such as Mark Mendoza of Twisted Sister. You can check out their tour diary here: >>

How are you getting on with spreading the news to audiences around the United Kingdom?

Well, for sure, the South Coast – and especially our home-town – is where we find our most energetic fans. We always have a good reception.

But we have found that all of the audiences are very receptive up North too.

It’s just about trying to get up here now, trying to get the time and the slots,  and making contacts …  so we’re getting there, slowly …

The problem is that you cannot be “More South” than us (geographically) – this is our problem [everyone laughs].

And as soon as people see our hair [laughs] and they hear that we come from the South Coast of England – they  think, “Oh Yes! It’s gonna be a surf rock band.”

What other territories do you think  that you could move into?

Well, the album sells all over. We’re trying to track it. We have had the album come out in Brazil, Germany – all over Europe. We have had them going out to Japan and, you know, it’s really nice that people out there are following the band. And it’s good to get a reception in different countries…

The album flies out to those people –  and then maybe we can fly out ourselves – following the album- to meet them. But we do not have a huge budget  behind us …

We don’t have big magazine adverts or anything like that  …  But we are already really, really, overwhelmed by the number of records that we sold …

… But now people are starting to discover who we are and – we think –  the proof is in the pudding. The concerts will sell out. People come to see us. Sometimes we are really shocked (but we are really, really, pleased) that people are saying things like:  “Yes, it is worth going to check out this band.”

There is talk of doing Sweden Rocks and doing some other things like that … and we are doing Skyfest in September – which has got an incredible line up. Wow!  It is going to be a good weekend …

So where do you think the band is now – in terms of ambition? How far do you want to go?

In terms of ambition – and what we want to achieve – I think we’ve probably only just begun.

We do not ever want to end up “Little”.  We want to go ‘wooosh’ right to  the very top.

We don’t  think we will be happy until we (probably)  play the O2 arena, but – even then – we still will not be happy .. [Laughs]  But that’s all we ever think about …

We are taking the first “Steps”….  We are trying to get on our way. [The whole group laughs while they start to sing “Tragedy” – all doing all the ‘hands on the sides of the head’ dance routine.]

Ahhhh! This is something that we will never be able to do now – support ‘Girls Aloud’

That was one of our dreams.

Not entirely sure how we’d integrate it, but, you know, it’s an idea.

So, you’re working on a new album already?

Yes we already are. When we did the first one –  we had already started writing immediately for the second

And we would not put out anything that we are not entirely happy with.

We are the biggest fans of our own work, you know, so when we do something … we propose to do the right thing for us.

And what will the New Album be called?

Er no. Maybe we’d better just lock ourselves away (again)  for a few days, hours, weeks. So we can get the best out of us and then start re-visiting what we have.

Maybe then we’d get ourselves a better title. Then it will be a lot more than 42!

SUMMERS were talking to © Neil Mach