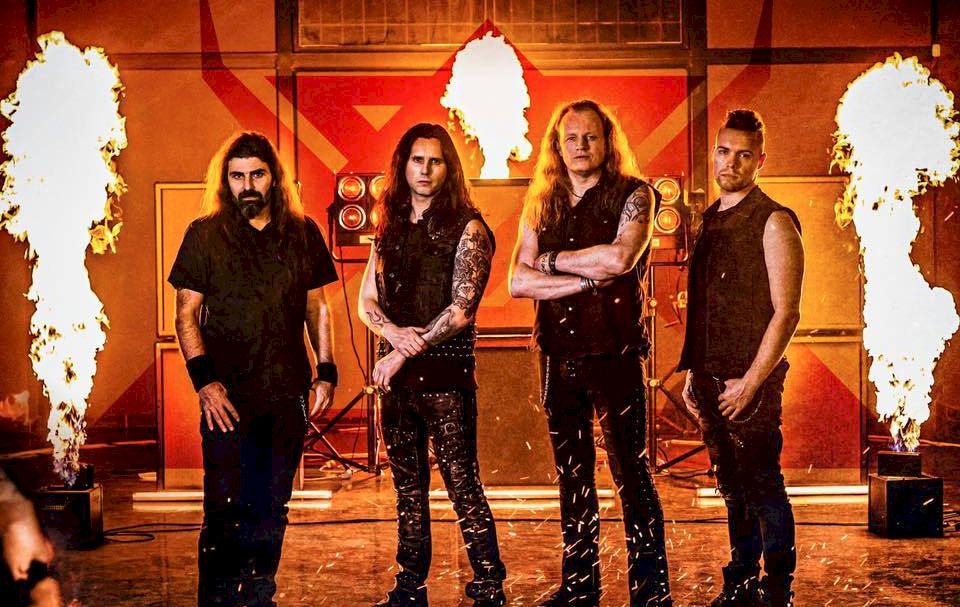 The Greek power metal band FIREWIND formed in 1998 and centred around heavy metal guitarist GUS G have recorded nine albums from a demo album in 1998 via the first indie-label full-length release Between Heaven and Hell (on Massacre Records 2002) to the 2017 European release of their dramatic “Immortals” that introduced “new” singer Henning Basse. In Spring 2020 the band announced that Herbie Langhans (who has previously worked with Sinbreed & Avantasia) will replace Basse on vocals. The also lost Bob Katsionis (keys and rhythm guitar).

Towards the end of March they released “Rising Fire”taken from a new self titled album “Firewind” is due out May 15 2020.

The reinforced tonicity and savory timbre of Herbie’s voice on this track optimized the energy of Gus’s electric arc guitar-fire. While the rhythms were a set of buzzing, bounce-jumps. This was untamable and excandescent. Exciting!

Their new video (shared below) and titled “Welcome To The Empire” also from the 2020 album has a sweet line of melisonant guitars and a clink of keys at the beginning. Soon a spectacular riff is generated and a verse that brings emotional insight and capacity. Welcome to the empire? Welcome to the darkest netherland, more like… the ancient empire is a wasteland… the new must be built on selflessness, responsibility and honesty.

About the number, Gus G. says: “Welcome To The Empire is the opening track of the album […] The story is set in a dystopia, where humanity has been surrendered to the New World Order. Two cyborgs are playing with the future of mankind in a chess game. Each move has consequences and technology will be the only winner. It was a really challenging production, but we love the end result. We hope you will too.”

“It’s kind of a Sci-Fi story about the over-exploitation of nature seen through the eyes of a lonely astronaut, orbiting earth in his space capsule,” Gus adds.