The UKBlues Federation has announced bands for the 2018 UKBLUES CHALLENGE.

The UKBlues Federation is a pan-UK Federation, established in 2015, aiming to help and support the pursuit of the Blues both inside and outside the United Kingdom in all forms and styles.

The 2018 Challenge is to be held at Worthing Pier’s Southern Pavilion on Saturday 8th September.

Previous Challenges were held in Sutton, Bilston and Liverpool and all saw Blues being celebrated and played to the highest standard.

The musicians who go on from the UKBlues Challenge, represent the whole of the UK and fly the flag for British Blues.

For 2018, the line-up for the challenge is as exciting as in previous years with a quartet of bands; GREG COULSON, TOM C. WALKER, KYLA BROX and CATFISH representing an impressive & eclectic selection of what the blues are all about in the UK today.

Again, a fifth band is to be selected by the Jessica Foxley Unsigned Project (to be announced after the Great Rhythm and Blues Festival.)

RED BUTLER played in Europe in 2015 and their music was well received, raising the profile of the band throughout the continent.

The bar was raised further when four bands competed at Bilston’s Robin 2, three of which saw women taking the lead. DOVE & BOWEEVIL, REBECCA DOWNES, the KAZ HAWKINS BAND and WILLE AND THE BANDITS enthralled the audience and presented the panel of judges with a very difficult decision. Ultimately Kaz Hawkins won the day.

Kaz and her band became the first UK band to represent the nation at the International Blues Challenge in Memphis where they reached the semi-finals and won many fans as well as drawing attention to the wealth of blues talent in the UK.

The following year, the Federation took the challenge to the iconic Cavern in Liverpool, bringing the Blues back to the Club 60 years on…

For the first time the Challenge saw a fifth band participate — selected from the Jessica Foxley Unsigned Project — performing at the Great British Rhythm and Blues Festival in Colne.

The Robert J. Hunter Band joined the four bands selected by the nomination panel, Elles Bailey, The Rainbreakers, LaVendore Rogue and Zoe Schwarz Blues Commotion, all of whom brought their own take on the blues to the event.

Popular winners were LAVENDORE ROGUE who went to Memphis and to Hell in Norway and, with their idiosyncratic stage presence showed how diverse and original blues can be in the UK.

The 2018 fifth edition of the UKBLUES CHALLENGE promises to be a night of outstanding musicianship with five bands bringing their own subjective take on what blues is in the UK today, competing to win the opportunity to represent the U.K. in Memphis at the International Blues Challenge in January 2019 and the European Blues Challenge in Ponta Delgada in The Azores in April 2019.

Tickets for this superb event are available through See Tickets – https://www.seetickets.com/tour/5th-uk-blues-challenge

For more about the European Blues Union visit www.europeanbluesunion.com

For more about the Blues Foundation visit www.blues.org 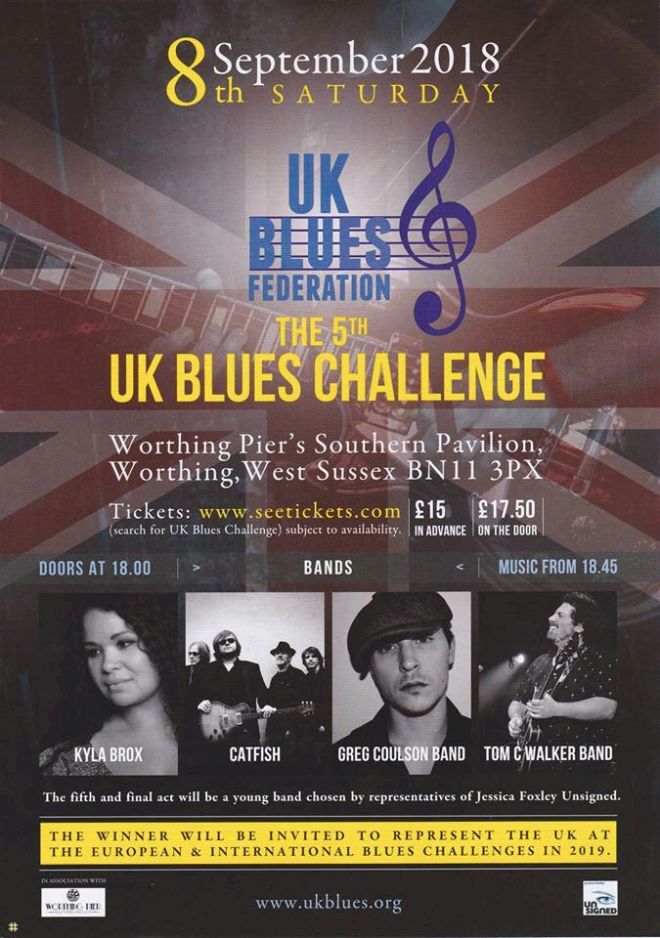