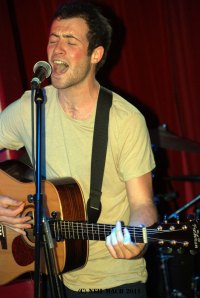 Recently, the Guildford band ‘Felix Fables’ have been beavering away at ‘The Fold Studios’, London, crafting their debut album due for online release 26th September 2011.  And on Thursday the band launched their new single ‘Wonderful World’ at the fabulous ‘Discovery 2’ night  at “AAA” (under Archangel) Kensington High Street, London.

Felix Fables mix bluegrass vim with some good ole’ fashion hot dog rock n’ roll.  So wind up your braces, hoist up your skirts and roll up them hems, ‘cos you’ll be bouncing and jigging to this band. Guaranteed.

There is something almost ‘Hugh Jackman’ about winsomely charming yet cheeky Felix Fables lead singer Michael Baker. Michael’s vocals are as honeyed and as generous as second helpings of Ma’s moonpie. And he thrums out magnificently bold chords on that acoustic guitar. By his side is the slightly shorter Chris Horsfall- on lead guitar- grinning ear-to-ear as his fingers flash across the frets of  his semi-acoustic & electric guitars and banjo. He brings a profusion of indie-rock style soaring sounds and textures to the ever-present hill-billy vibes.  Nick Roberts, on drums, playfully creates patterns and rousing rhythms on percussions. Tom (standing in for James) plays some honky-tonk, crucially boing-ing, bass guitar.

All the tales from the Felix Fables song-book tend to pelt along through the cotton-fields at a frenetic pace. So the good looking crowd at the AAA were treated to some fine & dandy foot stompers from the boys before their ‘big number’. Songs like ‘Voodoo Queen’ and ‘Kicking Stones’ are like gigantic tumbles in the hay. Giggling, roustabout, roughneck dance tunes. Others, like ‘Winter’s Bone’ are as plucky as Grandma’s rooster -with some worthy finger picked banjo from Chris and warm chords from Michael. Syrupy vocals and golden harmonies add yeast to the heart of these sounds.

And the single ‘Wonderful World’ has more rubber-band twang than Duane Eddy at a knicker-elastic world convention …. with a simply ironic, tangy yet feelgood chorus and a quaintly English format – it brings to mind work by ‘The Kinks’ in both style and substance.  Rebel-rousing guitarist Chris Horsfall plucks, strums and plays magic-man on guitars and banjos. The banjo really adds to the countrytime textures. At times he plays like a man possessed. But his delivery is always in clever control and perfect symmetry with the directions and motivations of the band.

A little over year ago, although eccentric and brilliant, the Felix Fables seemed kinda kooky and geeky … and they possessed a gently wistful country air. But now the good looking quartet combine bucketloads of reelin’ and rockin’ guitars with jocular blue-suede jiggery-pokery and homegrown four-part chants.

And it is this rock n roll style that the crowds yearn for. Playtime, sing along, danceable sounds from an accomplished band who clearly enjoy themselves making music.

The fantastic set at Discovery 2 was completed successfully with an immensely satisfying performance of “I Wan’na Be Like You (The Monkey Song)” [from Walt Disney’s 1967 film, The Jungle Book.]

Come to the hop as soon as you can!