We described the band’s debut EP ‘4 Shots!’ as a: “Magical adventure [with] exciting guitar-work, creative lyrics, and increasing complexity of composition…”

“Lullaby is a song that has the basic feeling of the world we all live in today — a world where you are told to dream big but, yet be realistic…” says Collateral’s front man Angelo Tristan. “I’d be lying if I’d said we’re not a pissed off rock and roll band like a lot of other bands out there. Lullaby has the simplicity, the power and emotion that you should expect to hear on Collateral’s debut album.”

Lullaby was produced by Sean Kenny and Collateral and mixed by Romesh Dodangoda (Bring Me The Horizon, Stone Broken).  The new single is the follow up to Collateral’s previous single, Midnight Queen.

Collateral recently won a competition out of 20,000 bands to play the Electric Ballroom main stage at Camden Rocks Festival on Saturday June 1st. And the band made it to the semi-finals to play the Jon Bon Jovi Mediterranean Cruise this summer. On June 15th, they play the Ramblin Man Rumble semi-final at the Big Red, London. The winner will play the Rising Stage at Ramblin Man Fair.  The boys also play Planet Rockstock in December.

Although “Lullaby” starts as a sledenhammer of volatility — with hacking-great riffs & rhythms and thickened street-punk bass-notes — the melody, when it comes, is controlled and fluent. This number is beautiful on the inside as well as the out. It’s smokin’ and it’s tuneful.
File with pride alongside your best-loved mid-1980s Bon Jovi 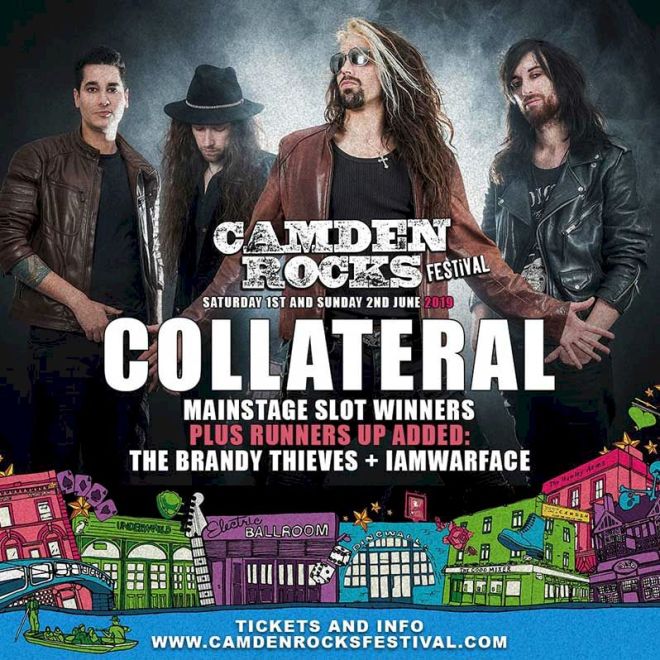